Salwa Movie Night: In Between

How Wow Now Movie Night presents "IN BETWEEN / BAR BAHAR" by Maysaloun Hamoud.

On Saturday, 26th January, elaborating on our original theme for this group of events "IN BETWEENESS" we will be showing the movie "IN BETWEEN / BAR BAHAR" by Maysaloun Hamoud on the big screen. Afterwards, we will have an engaging discussion with some drinks.

ABOUT IN BETWEEN / BAR BAHAR >> The film tells the story of three Palestinian women living in an apartment in Tel Aviv and how they try to find a balance between traditional and modern culture.

AWARDS>>The film had its world premiere at the 2016 Toronto International Film Festival where a jury awarded it the NETPAC Award for World or International Asian Film Premiere. At the 2016 San Sebastian Film Festival, the film won three awards: the Premio EROSKI de la juventud (Eroski Youth Award), the Premio TVE - Otra Mirada (TVE Another Look Award), and the Premio Sebastiane. At the 2016 Haifa International Film Festival, In Between won the Danny Lerner Award for a Debut Feature Film; additionally, its three principal cast members (Hawa, Jammelieh, and Kanboura) won the Fedeora Award for Artistic Achievement in an Israeli Feature Film. At the 2017 Ophir Awards, the film had 12 nominations and won for both Best Actress (Shaden Kanboura) and Best Supporting Actress (Mouna Hawa). 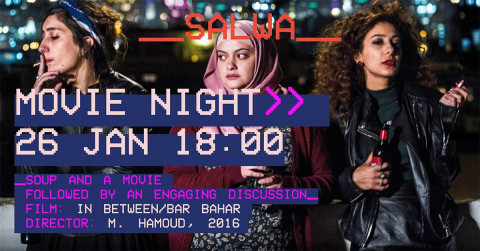