From concept to creation: A session into creative workflow of VR as an artistic medium.

During this workshop, Ali will discuss the challenges behind creating and implementing his imaginations into VR. Giving an insight on different forms of crafting virtual realities and experiences ranging from narrative to fully interactive.

He will introduce available VR headsets, tools, and their differences. Ali will go through an overview of his past 5 years of experiments and projects in VR and how his practice evolved throughout time as a completely self-taught practitioner. In addition, he will present his current research project “False Mirror” which attempts to create a growing virtual city based on speculations of a possible future where we all might live completely virtual.

This workshop is part of HOW WOW NOW series that was co-curated by Margarita Osipian -Margarita O- under the theme FROM ALL SIDES.

Ali is a VR Artist and Practitioner from Iran. He has been working with VR technology since 2014 coming from a background in 3D art and creative coding. He develops and designs Interactive VR Experiences to explore new pathways in this emerging medium. Further than that, re-imagine and construct possible futures through the speculative design of virtual space, time and bodies.

His realities span between fiction and non-fiction to reflect his practice-led research using VR. Besides crafting realities, Ali is active in running VR lectures and workshops. In 2016, His VR project won the IDFA DocLab Award for “Best Immersive non-fiction”. 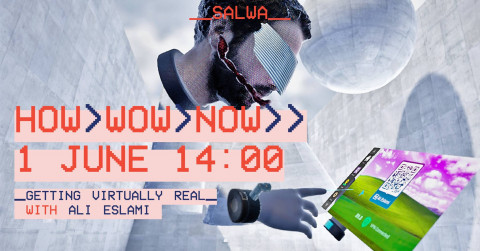