A World Not Ours by Mahdi Fleifel

Moviemento presents: A World Not Ours by Mahdi Fleifel.

A World Not Ours is an intimate, humorous, portrait of three generations of exile in the refugee camp of Ein el-Helweh, in southern Lebanon. Based on a wealth of personal recordings, family archives, and historical footage, the film is a sensitive, and illuminating study of belonging, friendship, and family. Filmed over more than 20 years by multiple generations of the same family, A World Not Ours is more than just a family portrait; it is an attempt to record what is being forgotten, and mark what should not be erased from collective memory.

Mahdi Fleifel is a Danish-Palestinian film director who graduated in 2009 from the UK National Film & TV School. He is the co-founder of London-based production company Nakba FilmWorks which he runs alongside Irish producer Patrick Campbell. His debut feature, A World Not Ours (2012), premiered at the Toronto International Film Festival and picked up over 30 awards, including the Peace Film Prize at the 2013 Berlinale and the Edinburgh, Yamagata and DOC:NYC Grand Jury Prizes. In 2016 he won the Silver Bear at the Berlinale with A Man Returned. His recent film, A Drowning Man, was selected for the official competition at the 2017 Cannes Film Festival and nominated for a BAFTA in 2018. 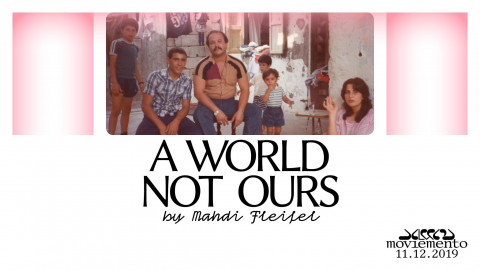