Traditionally, a rehearsal is a built-in process, a space and time for developing ideas and work acknowledging unexpected and unpredictable results. Another important point about the ‘rehearsal series’ is to break the distancing between mind/body, self/other, subject/object, discovery/invention. Enhancing the idea of process over product: processes of becoming, becoming structures, becoming codes and scripts.

In the Media Choreographies workshop, ‘rehearsal’ it is meant a temporary stage for experimenting with algorithmic tools which follow choreographic methods and thematic concerns. This format is very similar to an open workshop, open to any participants curious to explore the use of choreographic techniques to generate visuals, new modes of thinking, composition making, collaboration, relations and articulations between bodies and technologies.

This workshop is part of HOW WOW NOW series that was co-curated by Margarita Osipian under the theme FROM ALL SIDES.

Joana is a graphic designer, coder, researcher — with a background in dance. Her trans-disciplinary project interweaves web environments with choreographic practices. In her practice she researches the intersection of the body with the constructed, designed, programmed environment, aiming at in widening the ways in which digital sciences is presented and made accessible to the public. She has been actively participating and organizing events with performances involving multi-location collaborative coding, algorithmic improvisation, open discussions on gender equality and activism. 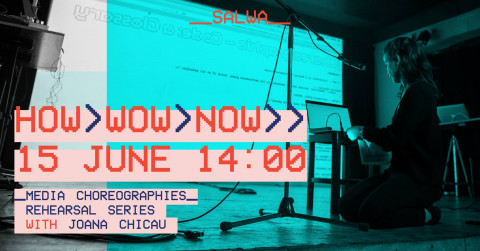